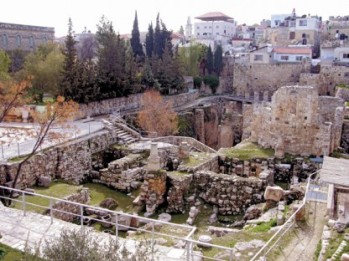 A bible story came to mind a few days ago and I wondered about it.  The story was about the pool of Bethesda, where supposedly an angel of the Lord came and stirred the water in this pool where large numbers of invalids would lie, wanting to be healed of their maladies.

The story goes that when the angel of the Lord stirred this pool of water, whoever got into the water first would then be healed.

Upon further reading of John MacArthur’s study bible which is an English Standard Version, I see that the end of verse 3 and all of verse 4 in John 5 is omitted.

“3b and they waited for the moving of the waters.  4  From time to time an angel of the Lord would come down and stir up the waters. The first one into the pool after each such disturbance would be cured of whatever disease he had.” (5:3b-4)

MacArthur’s notes reflect that this portion of text was not found in earliest holy scriptures and may have been added later.  A blog page confirms that verse 4 was added so that the reader would better understand the superstition of the angel troubling the water.  However, the water could have been moving due to bubbling up of a spring entering into the pool.

It goes to show what a true reading of the bible can do: in this case one might think that the Lord mercilessly plays with those that are ill, watching to see which invalid would crawl to the water the fastest and throw themselves in, but we know that is not the true character of Jesus Christ.  Why would He do all that?  This folklore may have reflected the people’s false teachings of the day and reflected the common knowledge of pagan gods.

In any case, it is wise to know what version of the bible you are reading in case the text is different from one bible to another.  We shouldn’t be reading added text from what a scribe interprets the scripture wto be saying.  In this partial text that was added to the bible, we are given exposure to the belief in the darkness of pagan gods.

In this story, when Jesus comes upon the invalid we come to what Jesus directly said to the man.  We see that the man had been an invalid for thirty-eight years, and we come to the divine knowledge of Jesus who knew he had already been there a long time, who asked him, “Do you want to be healed?”.  No teasing an invalid there, but a direct, observational question.  This miracle was performed on the Sabbath against rabbinical law which forbade man from working in any capacity on the Sabbath.  MacArthur’s notes describe how Jesus may have picked healing on the Sabbath to be in direct confrontation with these rabbis who practiced their religious hypocrisy, such as their being against anyone’s doing good on the Sabbath.

Compare this with the added text that distracts us from the behavior of Jesus and what he said.  What would the need be to add the text so that the reader understood the superstitious beliefs of that day?  I like how the story cuts to the chase.  After all, it shows the invalid has ideas that didn’t make sense in the original scripture’s version, that the water needed to be stirred so that the first man to get into the pool would be healed.  No explanation was given in the scripture making all the more obvious of this man’s need to be healed in the physical realm and the mental.

The man’s response to Jesus continues to tell us that the man had something wrong in that he did not gratefully answer “yes, I want to be healed!” and he did not seem to know who Jesus was by what’s found in the story.

Different versions of the bible should be explored as you walk with Christ since verses have been found to have been removed or added, and sometimes verses are found to be in direct opposition to each other from one version to the next.